With the NBN rolling out through Australia and the ever-growing uptake of wireless networks, it’s becoming easier to turn a regular home into a smart home. While some of the items due to come out may lead to bigger and better things in the future (such as an oven with a built-in camera that streams to your phone), there is already a treasure trove of functional gadgets that can make your lives that little bit easier. 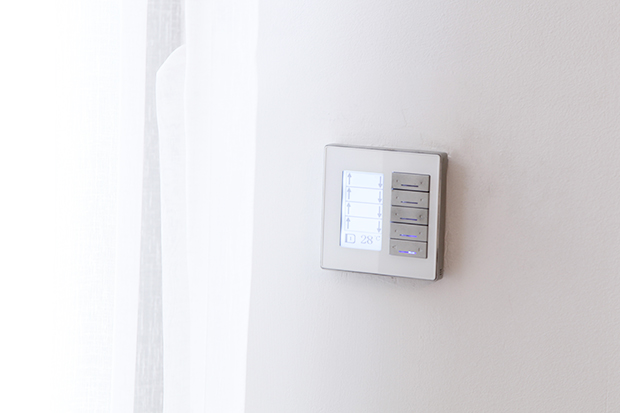 While the examples below are just the tip of the iceberg, they should give you an indication of how far smart homes have come.

Home security is always on the back of the homeowner’s minds. While having a great alarm system and monitoring service is all well and good, the system can’t help if you’ve forgotten to turn it on.

Thankfully, modern security systems are being integrated into home and business networks which allow the owners not only to check if the system is armed while they’re away from home but also view a live stream from any CCTV cameras they may have linked to it.

Tired of fumbling with your keys as you’re trying to bring in the groceries? A fingerprint, or better still, sensors built into the lock that detects when you’re nearby, are now on hand to unlock the door for you.

While keeping our families and our homes safe is incredibly important, we can also look at ways of keeping everyone within our homes comfortable. Motorised shutters and reverse cycle air conditioners may have been around for years, but the way we use them is changing.

Smart homes can learn your patterns and control these systems for you based on your input. Rather than setting timers for everything, a series of sensors will detect when is the best time to either open or close the shutters in your home to let in light and warmth. You can also tie the sensors into your mobile phone so that they know how far from home you are and can get the air conditioner running at the best time.

While it may not sound like much, the difference will be seen in your power bills as these systems won’t be running unnecessarily.

One device to rule them all

Controlling all of the equipment in our homes is generally done by pressing a remote, or tapping on a screen. With more devices in the home being tied into our networks, it’s now easier than ever to tie all the controls to the one device. Whether it be a tablet or a smartphone, controlling your home can be done from wherever you may be.

The latest advances from Google and Amazon are also leading the way in helping homeowners interact with their homes simply by talking to them. Finding out what the weather is like, turning on music, and getting the latest news headlines can be done simply by asking for them.

Google’s products will even send visuals to your smartphone or smart TV so that you can see exactly when that new movie is playing. By linking these devices to a home control system, turning on the lights when you get home in the evening is simply a voice command away, rather than fumbling in the dark for the light switch.

With all the new gear on the market at the moment, developers haven’t forgotten about existing equipment. A number of products are available that can bring similar “smart” functionality to appliances by mixing the new with the old, for example replacing an infrared remote with a sensor that can be accessed from anywhere within the home.

While the technology is still finding its feet, there are plenty of current affordable and working tools that can be easily utilised today to bring your home into the future.

If you want to discuss the options available for your home give our friendly professionals at Everest Electrical a call on 0410 229 139 today.